Can you fathom 70 years of marriage? 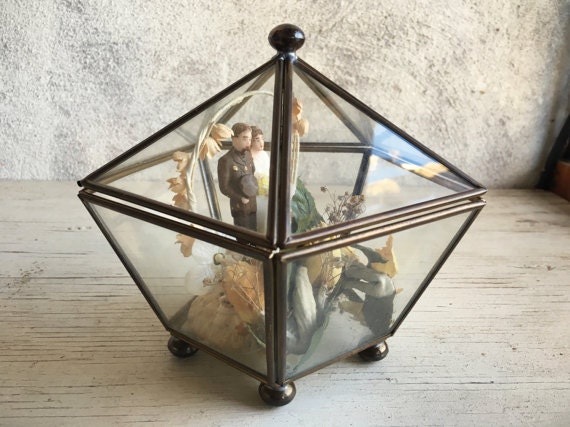 I recently found this gorgeous wedding topper from 1944 (!!!) with soldier and bride, encased along with original corsage in lovely brass and glass case. The wedding topper got me thinking about my parents and their marriage. Dad had been out of the army--he's a WWII veteran--for two years when he and Mom tied the knot. They celebrated 70 years of marriage last month. It's hard to imagine being together that long, especially since most marriages have only about a 50% chance of lasting.

The good news is with women waiting longer to marry, divorce rates have actually gone down the past few years. I got married later in life, at the age of 30, and last year my husband and I celebrated 25 years of marriage. But because we married so late, chances are slim that we'll get to 70 years of wedlock. I'd have to live to age 100, and Jim would have to live to 103! Not to mention, we'd have to make it through every fight, every conflict, every crisis we have yet to confront been now and then. That's a lot of ifs.

Although in all honesty, I'm pretty sure Jim and I will make it through just about anything that comes our way. One of the best lessons my parents taught me about marriage is that the unhappy times--the angry and ugly times--are simply part of the journey. I can remember many a drive home from Mom and Dad's Friday night bowling, me in the back seat crying and begging them to stop fighting, and them stopping only long enough to shout, "Roma, it's OK to fight! Fighting is part of being married!" Then they'd resume yelling at each other.

I do believe fighting is a natural part of being with someone for whom you care deeply and want to stay with. I'm not talking abuse of any kind, which is NEVER good, but rather old-fashioned debate and arguing and standing your ground. Because if you don't fight through some things, you end up feeling that you need to change some core aspect of who you are and what you love in life in order to make your spouse happy. And sometimes we just have to stand up for ourselves and say, "You're just gonna have to live with this, because this is who I am!" Case in point, I'm a world traveler who loves everything from beaches to polluted cities to villages. Jim's a homebody who loves mountains and deserts and badlands yet would never pay money to visit a smog-filled city where the traffic's so bad that it takes hours to get from one place to the next. So much of my travel is done without him. And what I've learned about myself is I've often loved being a solitary sojourner.

So yes, we might not make it to 70 years, but by golly, I'll be staying with this man of mine until death do us part. We've worked too hard to get to this point, and I sure as hell don't want to have to train someone new. ;-)

Previous Post The power of pilgrimage
Next Post Thrill of the hunt: Picking with Joe
0 items in your cart