Thrill of the hunt: Picking with Joe 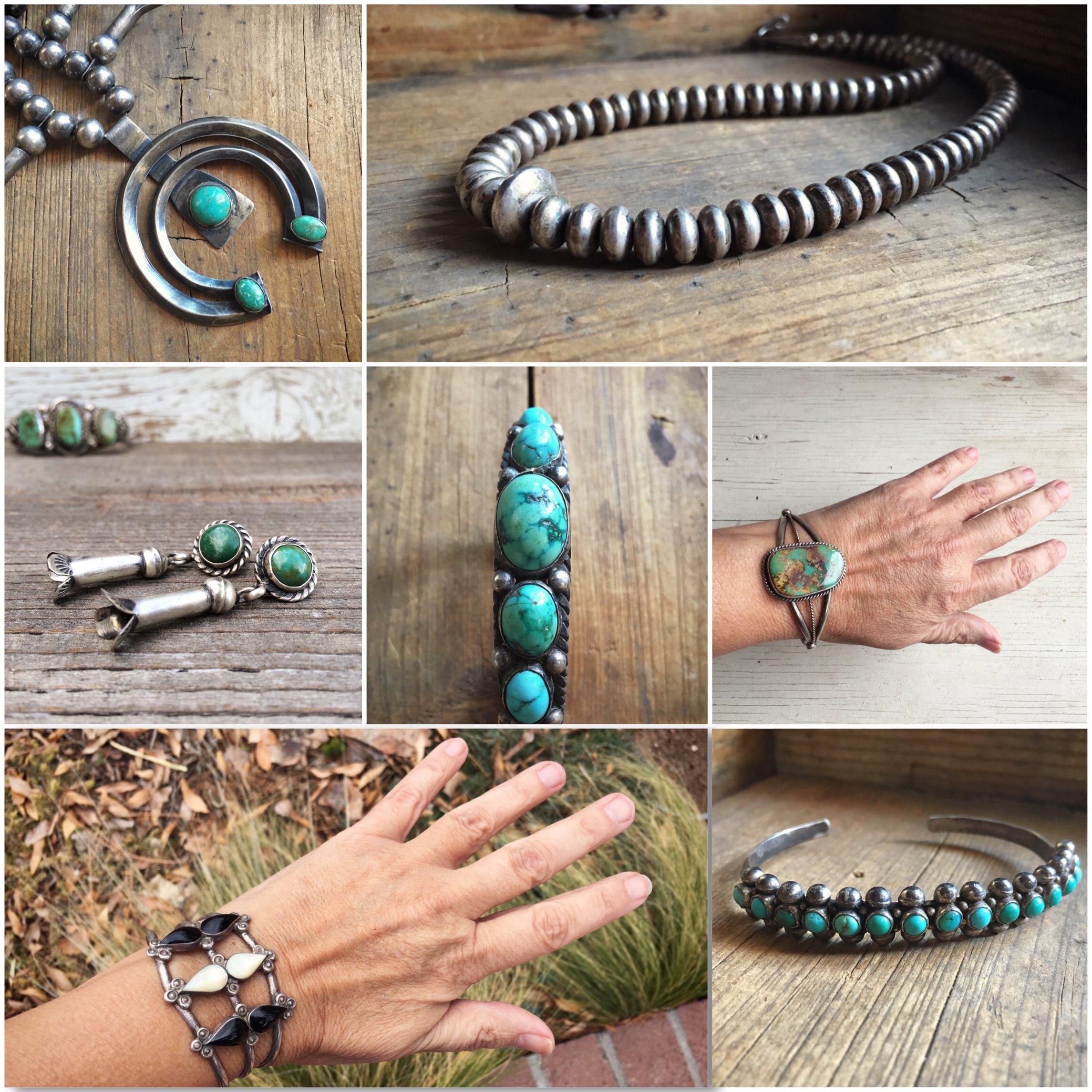 I think my favorite part about selling vintage is finding it. And anyone who collects old, authentic Native American jewelry knows it's getting harder and harder to find. So imagine my delight when one Saturday morning while selling a few of my vintage mistakes at my folks' annual neighborhood garage sale, I met a man who would become my best kept secret source for authentic Old Pawn.

That morning, at the garage sale, a little red truck stopped in front of the drive and out marched a man wearing a mechanic's one-piece uniform, fingernails black from grime.

"Got any silver," he asked.

He looked to be about 75 and had a gruff voice that reminded me of my grandpa.

That struck up a conversation about Old Pawn and selling antiques and vintage, and northern New Mexico, and about twenty other related and unrelated topics.

Turns out this man--I'll call him Joe--was a former antiques dealer, scrappy and used to living by his wits. Several decades back he and his son started a heavy industrial business working on highways throughout the state. The business grew and grew and now kept him too busy to sell antiques. But once a dealer, always a dealer. So on his many trips watching over construction sites, he picks up Old Pawn. And he's got a network a mile wide of former pawn shop owners and Native American artisans. We ended our conversation with him giving me his card and telling me to call anytime I wanted to buy jewelry.

By the next weekend I hit the road and pointed my car in the general direction of where Joe said he had his industrial place, and I rang him up. He answered right away and told me to meet him at such-and-such intersection, that his place was remote and I needed to follow him in. Right about then I started to wish I'd brought along my husband, although I knew he'd tell me I was out of mind and probably try to talk me out of going altogether if I called him to let him know what I was up to. So I did what any self-respecting and slightly obsessed picker would do and called a fellow picker friend who I knew would understand this fever that led me to following a complete stranger to an undisclosed location. Told her I'd drop a pin once I got to the place, and if she didn't hear from me within the hour to send the police to come find me.

And drop a pin I did! We drove to a huge, remote property on the edge of a ravine. It looked part junkyard and part set from the series Breaking Bad. A huge chainlink fence surrounded the about 20-acre property, all topped with barbed wire, and a sign at the gate announced: We shoot first, ask questions later. I followed Joe in, the gate closing behind us, and we drove past huge steel cranes and enormous steel tubes and a good number of mobile style buildings. One thing the place didn't have was another soul besides me and Joe. He stopped in front of a storage building, the kind big enough to walk into but with no windows, and my mind flashed to a scene in Silence of the Lambs. Ain't no way I'm walking in there with him, I told myself. So I got out of my car, mobile phone in hand with 911 ready for speed dial, and told him I'd wait there while he got the stuff. Even though I had no first hand experience, it felt like a drug deal about to go bad.

So Joe disappeared into the storage unit, while I looked around to see if maybe there was someone somewhere in that vast deserted place who might help me should start screaming. Nope. Meanwhile, Joe kept calling out to me but I refused to get anywhere near the door. Sure enough, he eventually emerged with a big flat glass case, placed it on a dirty work table where I could see he'd been working on a bunch of antique projects, and told me to get looking while he went back in to get more. I noticed a big steel pipe that I could use to defend myself if while hunching over to see what he had, he tried to get me.

In the end, all of my fears were unfounded. The only thing that transpired was I gained a good friend and an invaluable source for the most amazing Old Pawn, Native American jewelry ever! I've since gone back at least a half dozen times, and on a couple of the visits I actually took my mom with me. Turns out old Joe and Mom hit it off, and they know a lot of the same people up in northern New Mexico. Joe grew up not far where Mom is from, so they reminisce about old mining towns and cowboy country. And she always picks out a few pieces to buy for herself while I do the big picks of his best stuff.

Well, that's Joe. All of the pieces in the picture above came from him. Several have sold, but I still have a few of his finds, and I'll continue to pick with Joe as long as he'll let me.

Previous Post Can you fathom 70 years of marriage?
Next Post Inspiration from Home
0 items in your cart