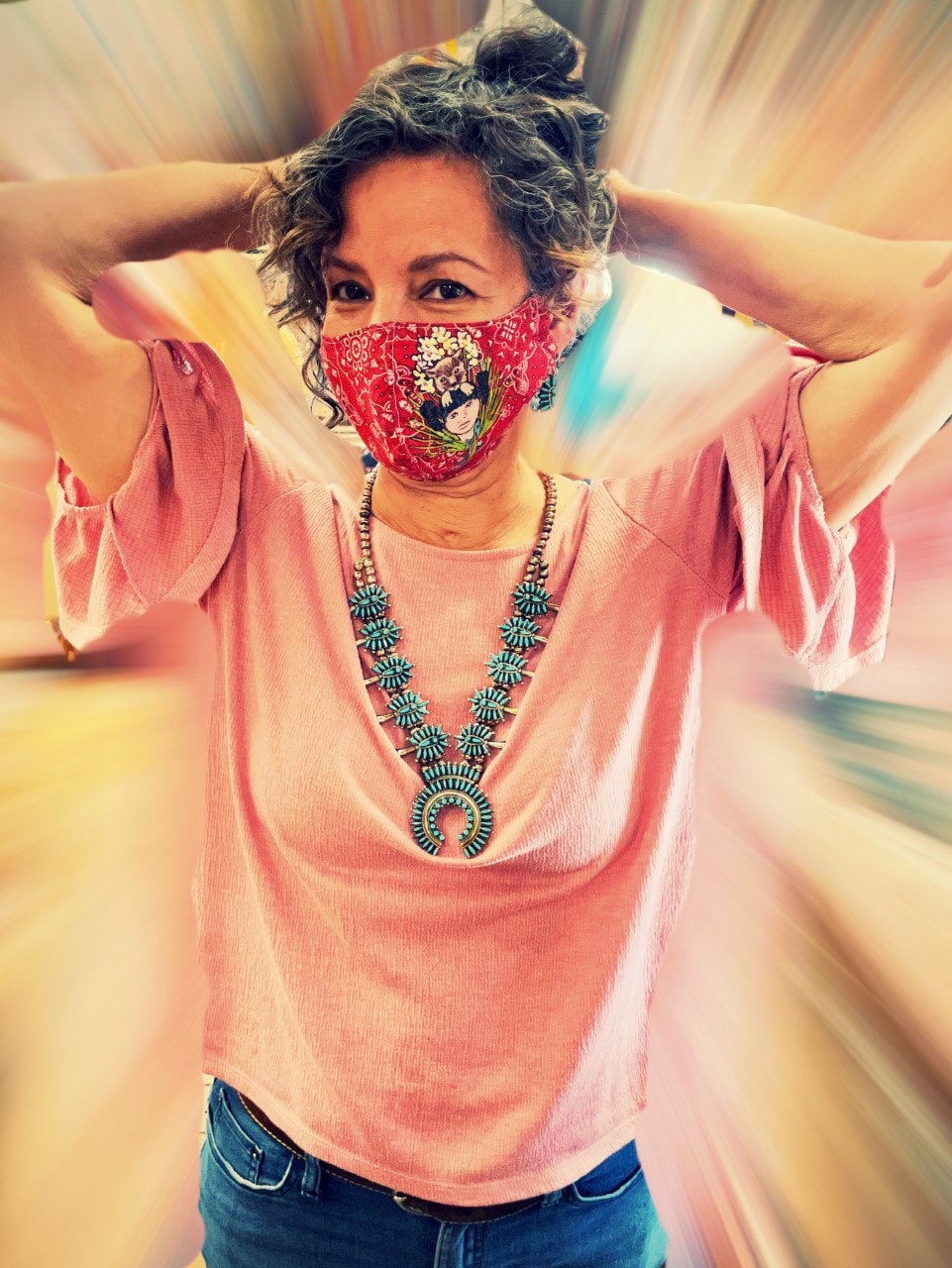 I still remember when my Aunt Sophie held the 50th wedding anniversary party for my grandma and grandpa in her Santa Fe home. My mom had four sisters and two brothers; Aunt Sophie was the oldest. Her adobe home was beautiful, lots of interconnected rooms, walls filled with paintings by local artists, including several by famed self-taught artist Tommy Masiano. All the women, including my grandma and my mom, wore their squash blossom necklaces. Their arms were stacked with cuff bracelets, and fingers with rings. Grandma's earring holes by then were so big from wearing heavy earrings that I often joke that she had gauges (those large holes in ears that you see in certain African tribes and among young people today) before gauges were a thing with American youth.

Squash blossom necklaces were what we pulled out for the most important occasions in life--weddings, anniversaries, celebrations of all types. These necklaces are special. They take a lot of work by the artist, and their history is a reflection of the history of my native New Mexico.

According to Lois Sherr Durbin, author of the book "North American Indian Jewelry and Adornment," the first squash blossom necklace was created in the late 1870s or early 1880s, after the indigenous peoples of the Southwest--the Navajo (or Diné) and other groups--had contact with Spaniards coming up from Mexico. That contact was tragic and devastating for many reasons. Indigenous people were killed through war and disease, lands stolen, men and women enslaved and maimed. There is a silver lining, however, and it is literally silver.

Pueblo and tribal peoples of the Southwest had been making jewelry for centuries, but the Spaniards coming up from Mexico introduced a new resource: silver coins that could be melted into ingots and forged into jewelry, and tools for doing that work. The Navajo were the first indigenous group in this part of the world to make the squash blossom design, and by the early 1900s the form spread to the Zuni Pueblo and other groups.

The pendant on a squash blossom necklace is called a "naja," and that form was brought to this part of the world by Spaniards via the bridles on their horses. The Spanish adopted the form from the Moors, who had conquered Southern Spain from the 700s to the 1400s. The Moors used the crescent as a talisman, believing it offered protection to themselves and their horses. So the naja form itself originated with the Moors, was adopted by the Spaniards and brought over to the Southwest via their horses and bridles and saddles (the horses also traveled via ships along with men and women to Mexico) then adopted into jewelry by the Navajo.

The necklace gets its name thanks to the bead with petals that goes up each side. If you look at the squash plant, which is food staple in Diné culture, you'll notice that the blossom is fluted and opens at the ends. And in fact, according to Dubin, Diné language calls that petaled bead, the "bead that spreads out." There is scholarly debate about whether the petaled bead is actually a squash blossom or whether it is a pomegranate blossom. The pomegranate is an important fruit in Spanish culture--"granada" in Spanish--and some believe that the petaled bead derived from this Spanish fruit. It would make sense that the petaled bead would be inspired by the squash plant, which is such an important food to Native peoples, yet this other theory is plausible as well.

The earliest beads, both the petaled and simple round ones, were made with two coins that were domed and soldered together to form a sphere. The government put an end to the use of coins as jewelry, and sheets of silver by then were being made and used to make the beads.

Native Americans have traditionally worn squash blossom necklaces not for any specific ceremonial reason, but as decorative pieces of jewelry. According to Durbin, the necklaces were a symbol of status and wealth and cultural belonging. As in Hispanic cultures, like my own, a squash blossom necklace was something you wore with pride, knowing that it stood out, made a statement, and was considered the most beautiful piece of jewelry one could own.

My grandma had both Navajo and Zuni squash blossoms, ones made in the 1930s and 40s with natural turquoise and heavy gauge silver. Grandpa was foreman of one of the Springer ranches in Cimarron, New Mexico, raising cattle , pigs, and sheep. He would trade meat with Native Americans; my mom tells the story of how he'd supply pork to a Navajo woman named Benina, who would make dozens of tamales with the meat, keeping a portion for her family plus bringing plenty for Grandma and Grandpa and their kids. I often wondered if my grandfather also traded meat for jewelry, as Grandma had such a large and gorgeous collection.

By the 1970s, squash blossoms had gained such popularity that they were huge and heavy, made with lots of turquoise. The necklaces that my aunts wore to the 50th anniversary part were of that era. My mom gave her only squash blossom necklace to my oldest sister. When Grandma died, all of her jewelry was passed on to the aunt who had the most financial need. This was my Aunt Connie, who lived in Oklahoma. Connie eventally pawned and sold off all the jewelry, and by the time she died, it was long gone.

In the 1980s, I started looking for old Native American jewelry. I had this yearning to capture my grandma's jewelry, as anyone who knew her remembered how she wore her necklaces and bracelets and rings constantly, doing dishes in them, sleeping in many of them, and wearing them not as something special but as everyday wear. Yep, even the squash blossoms became something she wore not for just the big events but as grew older, just for the precious days of her life.

I'm still looking for grandma via old Native American jewelry. I often find a piece that is so her, My Grandma Romey, the woman I was named after. I'll keep looking.