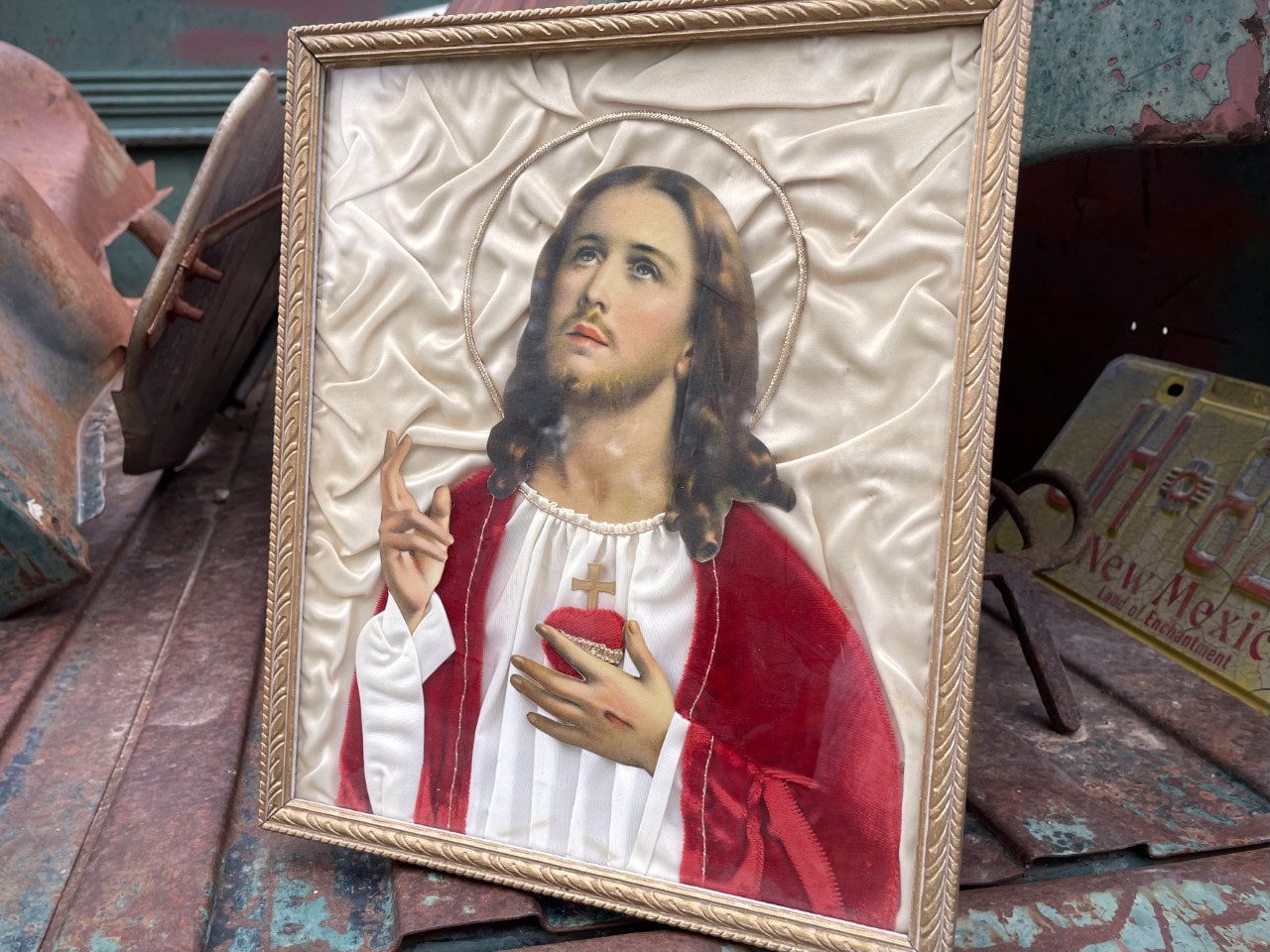 When I was about eight years old, my mom took me to her friend Tomasita's house to get my ears pierced. Tomasita must have been at least 20 years older than Mom. She had white hair that was always tinted in pale pastel colors--one month it would light blue, another month light purple. She had a big mole above her lip out of which sprouted a couple of stiff white whiskers.

Mom had brown hair and wore shorts above her knees and was not like any other mom I knew. All my friends' mothers were pretty much like the TV version mom on Leave It To Beaver, maybe not quite that dressed up, but always cooking and waiting at home with a snack when you returned after school. When I came home from school, often there would be a group of six or eight women sitting at the round kitchen table, cigarettes hanging off their lips, hands holding playing cards, and a cloud of smoke billowed up over them. Mom and her friends spoke in English mixed with Spanish. They had names like Natalie, except they pronounced it "Nat-lee" and Maggie and yes, Tomasita. They drank 7-Up and Coke, and played poker games with names like Spit in the Ocean.

Tomasita was not only one of these regulars at the poker games; she was one of Mom's best friends. When she lived next door to us, Tomasita's granddaughter would come to visit and became one of my first friends. She'd never knock when she came into the house, which drove my brother crazy. By the time I got my ears pierced, Tomasita had moved to a trailer on a cement pad, and Mom drove us there in the big blue Caprice.

So there we went the morning of my ear piercing. Tomasita's home was spotless, even the cement pad. We climbed the steps up to the trailer and walked into a living room that looked like no one lived in it. It may have even had plastic on the upholstery. Tomasita sat me down on a vinyl chair in the kitchen, and she and Mom arranged themselves around the formica table, with Tomasita right in front of me and Mom to the side. Tomasita grabbed an ice cube, which she had me hold to my ear lobe while she threaded a needle. I watched her as she cut the thread with her teeth then grab a box of matches to begin heating the needle. She and Mom talked in their Spanglish and seemed oblivious to me sitting there waiting and watching.

The last time a needle came near me, I passed out. It was at the doctor's office and I knocked over the nurse's cart filled with small medicine bottles. I was afraid I would pass out again there at Tomasita's kitchen table, yet I wanted nothing more than to have my ears pierced like my big sisters. Tomasita didn't even seem to notice the heavy match burning down as the needle tip turned black and then black-blue. I could feel that tunnel coming, so I leaned back in the chair, my arm now dripping with cold water from the ice cube that was almost gone. And then I saw it.

On the wall staring down at me was Jesus Christ. He had long brown hair, hazel colored eyes, and a big flaming heart outside his chest, which he cupped gently with his hands. His eyes were sad. They seemed worried for me, like they knew I  might fall off the chair just as Tomasita stuck that needle into my ear lobe. Neither she nor Mom seemed to notice that I was feeling weak and scared, they were talking over one another. Tomasita flicked the match in the air to put out the flame and at last turned to me. She moved in close to my ear, and I kept my eyes locked onto those of Jesus Christ. I didn't pray. I didn't beg. I just stared, knowing that if I lost contact, I would slip right off the chair and onto Tomasita's clean floor.

I remember feeling the pinch. I remember Tomasita talking to Mom and moving in to bite the string and tie it off into a little loop that I could move around every few hours so the hole wouldn't close up. I don't remember the second ear, had she given me a new ice cube, had she reheated the needle all over again? All I remember was Jesus Christ and how he seemed to be holding my eyes in his, and how he seemed to be holding me in his arms, like I was that flaming heart that he gently cupped. I remember thinking he was helping me to be brave and big.

After that day, I noticed Jesus Christ on the walls in other homes. At my grandma's there was the photograph of her late first husband, Pat Chavez, whose eyes followed us no matter what position we took in front of him. And maybe two frames over was Jesus Christ, also with those same eyes that never stopped following you. I noticed statues and grottos, woodland animals placed at the base of a large Mary statue, fake flowers poked in between an archway made of lava rocks. Old framed lithographs and chalkware statues were suddenly everywhere. My Aunt Olivia had painted terracotta statues all in her backyard, leaning against black irises and dahlias. Grandma had a little plastic saint magnetized to the dashboard of her car.

In my 20s I started collecting saints, and I learned everything I could about what each one represented. I learned that Jesus Christ Sacred Heart was about unconditional love, and the sacrifices a parent or anyone who loves another person makes on your behalf. I became fasinated with all the versions of the Mother Mary, the one who mourns her son, but also the one that protects the people and sheds light on those around her.

In my 30s, when I was pregnant with daughter Daisy, one day my husband came home with a saint he had bought from a well-known Albuquerque santero. Those are the religious people who paint and carve saints. Jim and I had decided we would have a home birth, and for some reason, maybe because I had started to surround our walls and shelves with saints, he decided to go buy one. He was not raised Catholic and had little knowledge of the saints but he stopped in the parking lot where a santero who goes by the name Siglo sold his wares. Jim brought one home, it was painted on board and on the back was the name of the saint, Nonato. It was one I had never heard of, but given my fascination with saints, I had a big book that told me who every saint was and what each one stood for. I opened to the N's, ran my finger down the page and found San Ramon Nonato. He got his name, "no natus" (unborn), because he was delivered by Cesarean section. He was the patron saint of midwives and women giving birth. I almost fell over, blown away that Jim had pulled over to the corner where Siglo sold his paintings and randomly picked Nonato to bring home to me. Jim later told me that the santero had suggested that saint given that I was pregnant.

By the time I was a mother and trying to figure out how to also be an artist and and individual, I learned about a saint named Lucy. I fell in love with Lucy before I even knew her story. She is always depicted carrying her eyeballs on a plate. Saint Lucy came from a wealthy family, her father died when she was five, and her mother thought it best to promise her daughter in marriage to a wealthy man. Lucy had planned to devote her life to God, and so in order to avoid living a life she didn't want, she poked her own eyes out so her bethroed would not want her. She is the saint invoked for ailments of the eyes--blindness, cataracts, eye injuries. But she is also the saint you turn to when you want clarity and lucidity in life, to help you make decisions or move forward on a path. I found a Saint Lucy chalkware statue just this past week. That one is staying with me.

A childhood filled with saints--in the homes of people like Tomasita, in my own home and that of my grandparents and aunts and uncles, and in church--helped me know I never walk alone in life. When I had daughters, any times they and I were scared, I would hold them and recite a Hail Mary. I would tell them to visualize being surrounded by her light and protection.

There is a saint for every need one might have. A saint to help find things (Saint Anthony), one to help when you're on the road traveling (Saint Christopher). There is a saint for labor (not just Nonato but also Saint Anne) and saints for roles as mother, father, stepfather, and more. There are saints to help cooks (Saint Pascual), musicians (Saint Cecilia), carpenters (Saint Joseph), florists (Saint Therese). There is even a saint for dogs (Saint Rocca). There are saints known for miracles (Lady of the Lakes), saints to help those with cancer (Saint Peregrine). There are so many saints, too many to know all their stories.

I don't go to church any longer. I gave that up years ago when I had trouble with unmarried celibate priests guiding me about my own complex life, so seemingly unrelated to their own. But the saints... The saints always understand my dilemmas and my fears. I can't pretend that every day I talk to a saint. But I do surround myself with saints, and every day I see them. And when I most need a saint, I call upon whichever one I know will help me be brave and big.