Remembering and Thanking Veterans on this Day 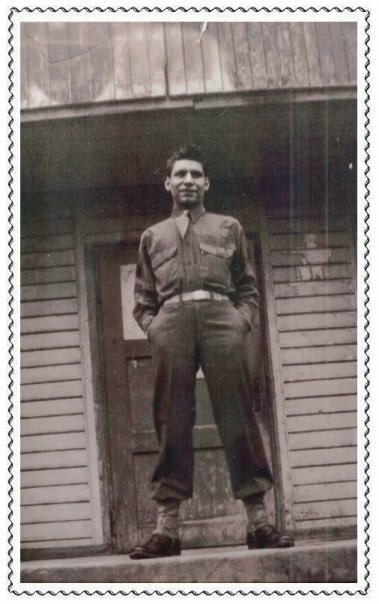 My father (pictured above in Le Mans, France) had gone through a lot by the age of 17, when he signed up to join the Army. His mother had died three years earlier, leaving him and four siblings orphaned. Dad had moved from the small town of Costilla, six miles south of the Colorado border in the San Luis Valley, to Taos. Younger siblings were taken in by family, but it was the Great Depression, and no one could afford to take in my dad and his older brother. That older brother worked in the Conservation Corps in Albuquerque then joined the Navy, and my dad, even before finishing high school, also signed up to fight in WWII.

I always think of Dad when November 11th comes around. Veteran's Day was originally called “Armistice” Day, to commemorate the day that World War I allies signed an agreement with Germany to end the fighting. The agreement was signed by German, French, and British officials, at 5:00am on the morning of November 11th, 1918. The Armistice itself began six hours later at 11:00am--the eleventh hour of the eleventh month of the eleventh day, which is why Armistice Day is always celebrated on November 11th each year.

Of course, WWI was not the war that ended all wars. In the mid-1950s President Dwight D. Eisenhower changed the name to “Veterans” Day to honor all veterans, those who served their country in war or peace, dead or alive. It's also intended to thank our living veterans for their sacrifices, for putting their lives on hold to serve our country.

Most men of my dad's generation are now gone. I have cousins who went into wars, willingly and unwillingly. They served in the Korean War and the Vietnam War. I worked in Vietnam for five years, from 2007 to 2012, and I saw many Vietnam Vets return to that country to meet with veterans there, to heal deep divisions and deep wounds from that horrific war. Sometimes when I talked to Vietnam Vets in the US, some balked at the idea of ever stepping foot there again. Sometimes it was healing for the children of the veterans to go and spend time there. As an American in Vietnam, I never felt hostility toward me. Vietnam is a young country, and young people don't know of the war and have no bad feelings toward Americans. My brother and brothers-in-law barely missed being drafted; had they been just a few years older they would have joined friends and relatives who were drafted. It is perhaps the war that I remember most, the one that imprinted on me because I saw the turmoil it created for the men who were drafted, and for all families and for our nation. Spending time in Vietnam gave me great faith, seeing how time has a way of not erasing, but certainly healing.

War touches our lives in many ways. We can see the traumas and scars that war leaves. Sometime I feel that as time goes on, we do forget the wars. We forget the bravery and selflessness it takes for someone to serve our country. So on this day, I think of Dad, so young and earnest, and the way he talked more and more in the years before he died, about being in France and the friends he made in the war and the memories he had of certain experiences. I think of my uncles and of my still living cousins, some with wounds that may never heal. And I send a thank you to all veterans, including those serving today. I recognize your courage and I have deep gratitude for what you have done and continue to do, for me, my family, and for our country.