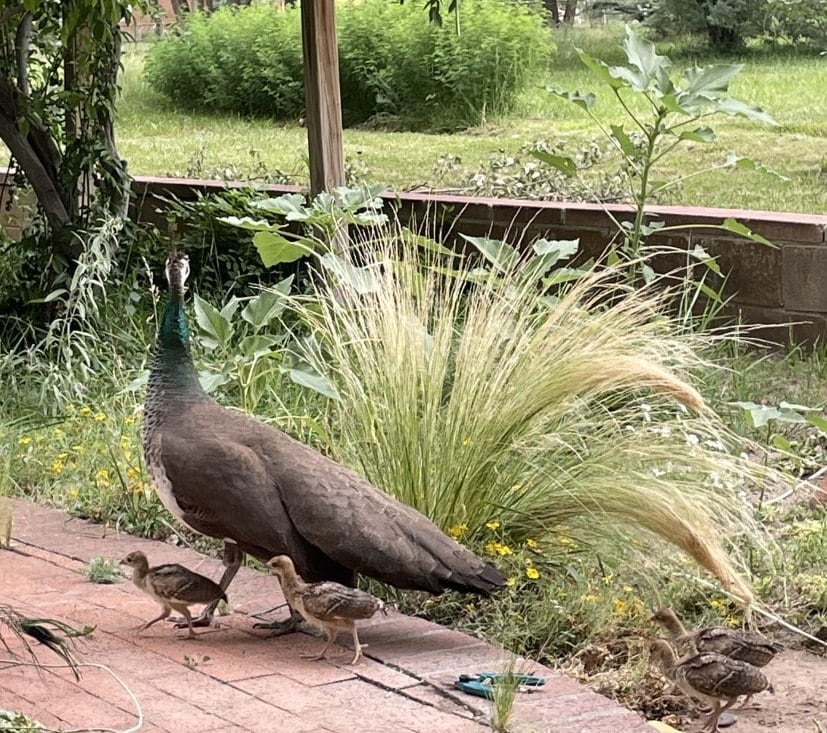 It's hard to believe it's only been a little over two weeks since Mama Petunia's four baby chicks hatched. So much has happened in such a short span. Right now it's just a bit after 6:00 a.m., and Mama and the four chicks have just flown down from a tall ponderosa tree outside my office window.

This tree feels safe and comfortable to me, as it must to Petunia. She just moved to this tree two nights ago, from the much smaller plum tree outside our front door. One of the babies especially had a hard time last night getting up into the tree so Jim and I stood and waited along the perimeter. Amazingly, also waiting on the ground until the baby made it up was the other adult peahen, who Jim has named "Not-the-Mama." The last baby had to take several hops to get up into the pondersa, and only when it flew to a tree branch near Mama did Not-the-Mama get up onto the roof of the house where she roosts.

Mama and babies started roosting about five or so days after the babies hatched. They couldn't fly when they were born, but within days they were starting to hop. For those first few days Jim put barriers at the exits of our patio, which has a retaining wall around it. By about Day 5 or 6, the babies could hop-fly up to the little retaining wall, and that was the end of trying to keep them corraled on the patio.

That's also about the time that Mama first tried to roost in a low branch in the plum tree. The first night she tried, it didn't work. Maybe it would have had Jim and I not inserted ourselves into the process. Jim had called to tell me to come see. Two chicks were stranded, one on a branch and one on the ground. I won't give a blow by blow, but it ended with Petunia attacking my head full force as I tried to pick up her babies and help them along. After a frantic hour as night fell and Mama didn't know what to do with the babies, largely because we were also running around trying to keep her from leaving with them, Jim opened the greenhouse door and Mama and babies spent the night there.

Petunia's attack, while jolting and even scary, reinforced to me the idea that Petunia has it covered. She is in charge. Since then I've done what I can from afar. Often now in the morning I'll wander around the yard clapping loudly at hawks watching Petunia and babies from high in nearby trees. We have big mature trees all around the property. The larger the chicks get, the more bold the hawks become. Yesterday one flew low right over Petunia and the chicks, almost low enough to swoop down and grab a baby. Petunia issued a cluck that immediately told her babies to drop low to the ground. She has another cluck that tells them to take cover under her.

Mama Petunia still seems a bit wary of me, since that fateful night when she flew at my head. She trusts Jim and lets him come right up to the babies to feed them all mealworms. Jim says she trusts me and knows I'm there to help, and I know she does. Jim has never scooped up her babies like I have, and when it comes to feral peacocks, you don't do those things. They're not pets; they only allow you to get so close. Yes they seem to want to be near us yet only on their terms. We often have to act like we don't even see them and then they will wander close, as if we are just part of nature around them.

Jim and I have become so attached, and I know a lot of others watching the chicks grow are in the same boat. It's nerve-wracking, but last evening as we sat by the garden and watched Mama Petunia, Daddy rePete, and Not-the-Mama all foraging for bugs in the garden, I was so happy.

Every day is a new day. I don't know that Mama will continue to keep her chicks nearby; already they leave for periods during the day. We'll entice them with mealworms to keep coming back. And we will keep shooing away hawks and other intruders. I am pretty sure she knows that we are all in this together, helping her babies survive and thrive.