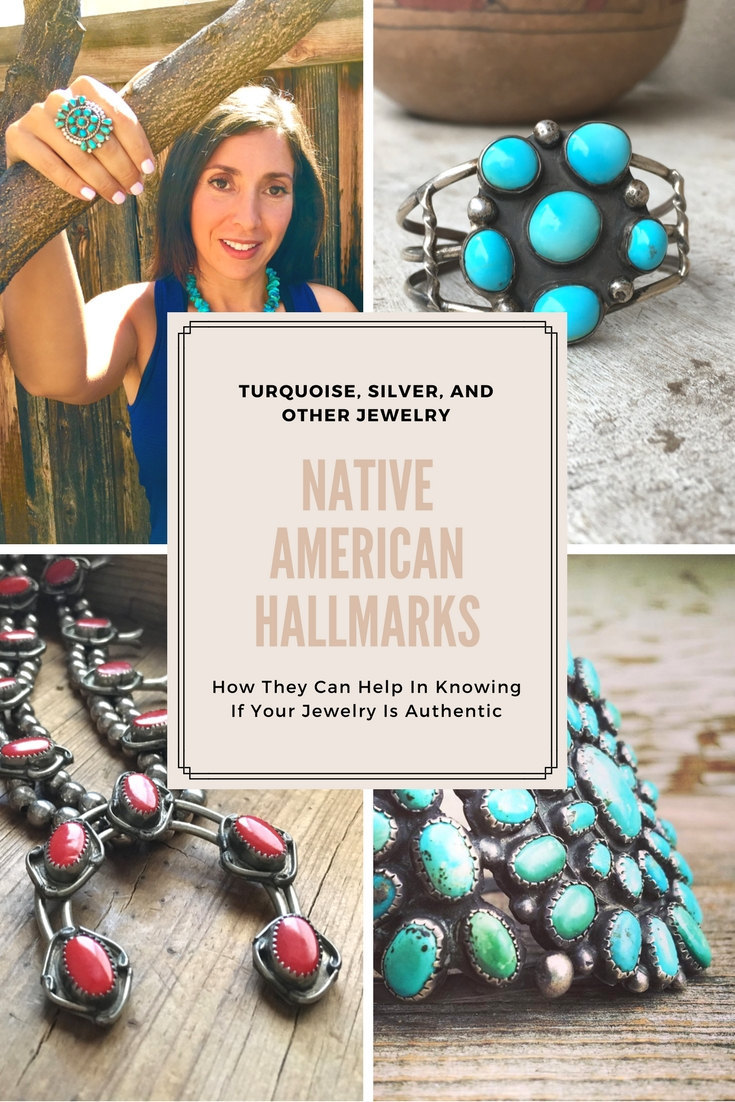 Native American hallmarks are not only key for honoring and recognizing an artist or silversmith who made a piece of Native American jewelry; they are also one of the ways to confirm that a piece is actually American Indian made. And confirming that provenance is more important than some people realize, as The Indian Arts & Crafts Act of 1990--a truth-in-advertising law--prohibits misrepresentation in marketing of Indian arts and crafts products within the United States.

In other words, if you sell Native American goods, you cannot claim that something is Native American Indian made (or Navajo, or Zuni, or Santo Domingo, or what have you) unless you can prove it. Proof comes in the form of hallmarks and/or certifications, but for most of us, hallmarks are the most accessible of these forms of proof. Before I share my most widely used hallmark source below, I just want to note that many older pieces carry no artist hallmark, as artist stamps only became more widely used in the 1970s. With those pieces, you can say you think the piece a certain type of jewelry (I carry many squash blossoms and other pieces that I definitely believe are Native made) but you also need to be clear that you are not saying with certainty that they are, thus allowing the consumer to make an informed buying decision.

Most of us who sell Native American jewelry and other items are not trying to misrepresent our offerings. The law is targeted to those out there who are actually trying to take advantage of people's love of American Indian arts and jewelry and falsely advertise non-Native pieces as Indian made. For the rest of us, always do your best to honor the artist and the culture. You can still use search tags that help people find your pieces; just make sure that in the description where you're actually describing YOUR piece that you are clear about the provenance, and even if someone tells you, say at an estate sale or wherever you bought it, that it was Navajo, do not claim it was Navajo unless you can prove it.

Oh, and one final note, hallmarks can be forged and are regularly forged by many people who are out to misrepresent their goods as Native American. I have come across entire stores in the tourist sections of some Southwestern cities filled with pieces made abroad by non-American Indians with hallmarks that look like Native American ones. When I push the matter and ask, "Is this made by a Native American?" store owners have admitted that no, these were designed by our shop and made in China (or the Phillipines, etc.). Most of these sellers that I've come across know about the law and will not make that claim when asked. Yet several of them have been shut down, as the average tourist has no idea that the pieces are not true Native American, and thus buy the pieces thinking that they are Native made.

It takes experience in handling jewelry, looking for file marks and using silver acid tests to figure out that a hallmark is forged. That's how I once uncovered fake jewelry, after I too quickly purchased a piece, then got it home and started to see other signs that just were not right. So hallmarks are an important clue, and especially accurate when combined with experience and knowledge.

My most frequented source for hallmarks is the one below, but if you search on "Native American hallmarks," you will find several others, and between all of these one is often able--not always, but often--to identify the artisan who made the piece:http://www.art-amerindien.com/signature_bijoux_amerindiens.htm