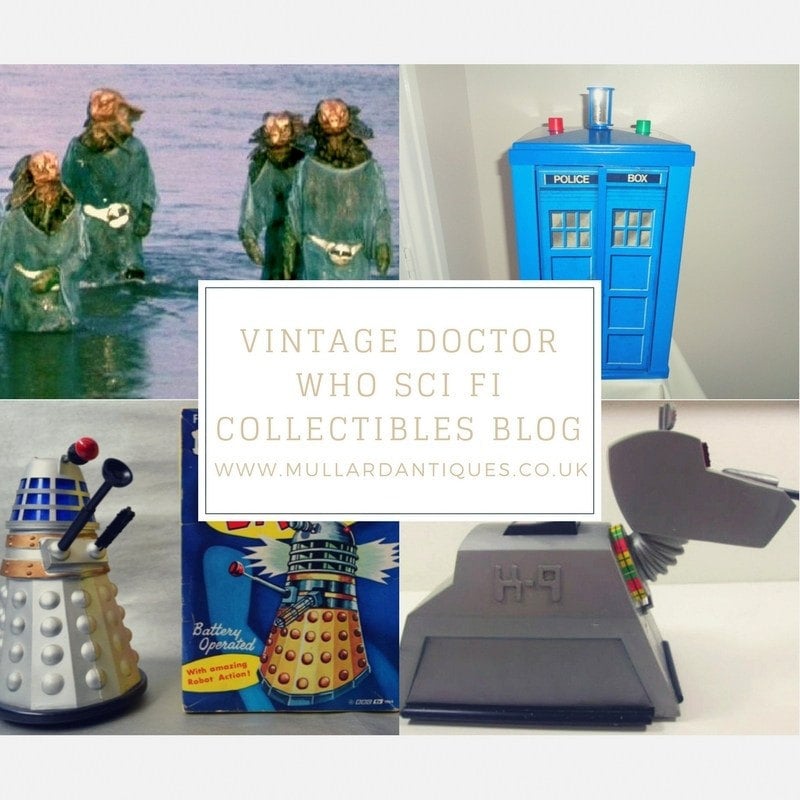 In common with most of the population, I seem to have grown up alongside the BBC’s Sci Fi series, Doctor Who: which is scary in itself! Has this character really been around since 1963? Not that I was around to see it in the early days but it is incredible how quickly time flies!

As a child, I used to hide behind the cushion or sofa to watch Doctor Who. I mean, some of those bubble wrap, latex and netting based monsters, Sea Devils in particular, were really frightening to a very young child. Looking back at the early special effects now and you wonder why you were so terrified! However, if you saw them rising from the sea at Blackpool or Brighton, I think you would still have a bit of a shock!

Most of us will have a favourite Time Lord in their life and I admit to two; if you are allowed two favourites?  Christopher Eccleston (Ninth Doctor), a fellow Northerner, and David Tenant (Tenth Doctor). I could relate to both incarnations, especially in the new Doctor Who Millennium format. The special effects were great. They had good assistants and, as an added bonus, they are quite handsome! Are you allowed to say that? I’m never sure these days!

The new monsters are equally scary. Those weeping angel statues are terrifying!

Daleks have always instilled fear but when I found out they could fly, well all I can say is that I’m glad I didn’t know that when I was a child: I would definitely not have slept at night!

Unfortunately, for me, the last two series of Doctor Who have been pretty dire to watch. The storylines were poor and I could not relate to the two assistants. In fact, we ended up recording the series and fast forwarded our way through most of it! I know some of you won’t agree but that’s just an opinion shared by my hubby and many Doctor Whovian friends! I am looking forward to the 13th Doctor though! Let’s hope it finds its mojo again.

If you would like to know more about the history of the Doctor Who series, then please click on the following link to Wikipedia’s excellent article on the subject.

The popularity and diversity of our favourite Gallifreyan alien, Doctor Who, has led to a plethora of Doctor Who related collectibles, from toys, figures, playing cards, lego, tableware, bubble bath, writing slates, comics and books to clothes! Many of the vintage (pre-1998) marketing merchandising are fetching good prices; especially if you can find them in pristine condition, which means in their original box and unused.

I haven’t got time in just one post to give you a complete history of Doctor Who collectibles. There is just too much to choose from and I’m no expert! Just an amateur ‘Whovian’, whom likes Doctor Who but couldn’t name all thirteen Doctors in order of appearance! But let’s have a look at some of those vintage merchandise collectibles which have nostalgia or high intrinsic value. Many of the early toys are now being reproduced.

Since Doctor Who first came to our screens in 1963,  people, (both young children and bigger kids!), like to have a small-scale figurine of their favourite Doctor, assistant or alien! Not to mention the plethora of Doctor Who gadgets and gizmos, from a sonic ray gun to the sonic screwdriver.

In the early days, mid to late 1960s, merchandising was still in its infancy. However, several enterprising companies including Marx, Cherilea Toys Ltd, Bells Toys, Pailitoy and Herts Plastic Moulders Ltd, whom retailed through Woolworths, produced Doctor Who merchandise. Marx are probably the most sought after by collectors.

Merchandising continued to grow in the 1970s when the BBC granted a licence to Denys Fisher (Mego Corporation). Followed by Dapol toys in the 1980s.

Louis Marx’s first figurine was of the Doctor’s nemesis alien race, the Daleks! Their most sought after figure was a ‘robot action’ Dalek. Powered by batteries, it had a flashing head and could change direction when it hit something e.g. a skirting board, thanks to the use of casters. A ‘brand new’ 1965 boxed version can fetch over £200! Later one inch versions used ball bearings.  The brand name for Marx Daleks was ‘Rolykins.’

There aren’t many of these 1976 Mego Denys Fisher Toy TARDIS/ Tom Baker Doctor Who Figure available these days!  Made under BBC licence by Denys Fisher (Mego Corporation), a series of figures and accessories were produced based on the 4th Doctor Who, Tom Baker.

The TARDIS is Doctor Who’s  iconic time machine. This particular 1976 version comprises an internal revolving mechanism, which is supposed to work as follows:-

Very clever stuff to a child of the Seventies and worth over £200 in good condition!

One of Doctor Who’s much-loved companions is K9, his cyberdog! There have been many versions made over the years but the one I particularly like is the 1970s talking K9 made by the British toy maker, Palitoy. A good boxed version can sell in excess of £150!

I couldn’t finish this post without mentioning the Cybermen: the race of augmented humanoids, lacking emotion and nearly impossible to kill due to their ability to continually evolve. From the time they first appeared on the screen looking like blokes in silly suits, to their current super cool cyborg design and model, their choreographed walking action and lack of humanity make them a very formidable opponent. One of the few species that even a Dalek fears! This particular Cyberman is a 1970s Denys Fisher Figurine and, again, worth more than £200!

Well readers, I hope you have enjoyed my meander around the subject of Doctor Who collectibles. As you can see, the merchandising from the 1960s and 70s is really shooting up in value. Time to go rooting through your old toy collection. You never know what you might find!

To learn more about Karen, please visit her store at mullardantiques.co.uk  and you can follow her on  Twitter @MullardAntiques,  Google+ at +MullardantiquesUk, and Instagram at mullard_antiques.

Previous Post A New Era in Vintage & Antique Shopping
Next Post Real or Fake: The US Government Takes on Fraudulent Sellers
0 items in your cart