The Delights of Vintage Vacuum Cleaners & Misuse of Electrical Products 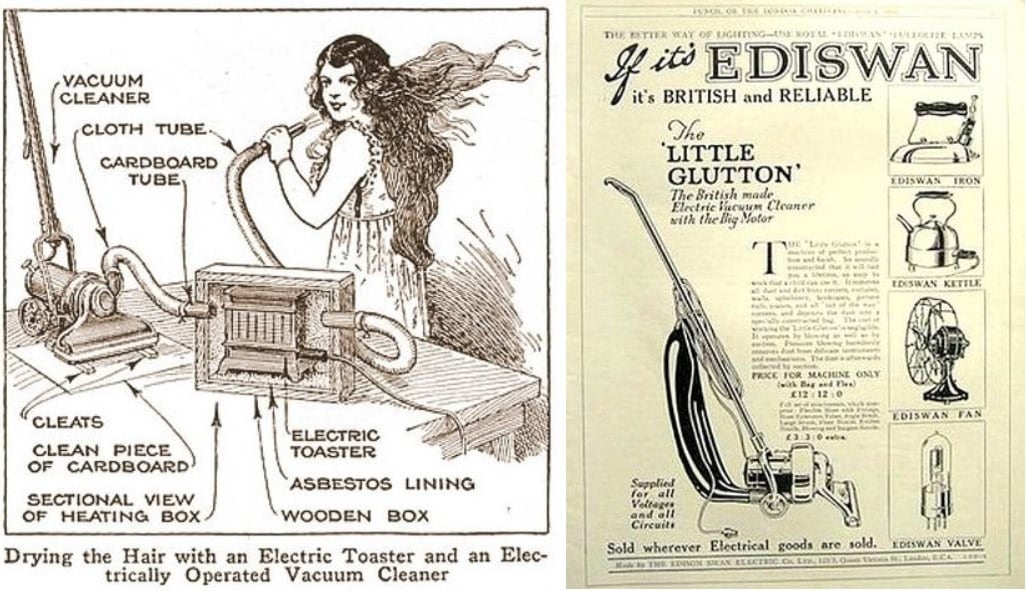 We have all heard of items being used for purposes they are not designed for as tools. Heck, there is even a crow in my back garden that uses a pebble to crack open snail shells so we are not just limited to humans here. That said, problems can arise when electrickery is involved. Imagine my surprise when I saw the interesting image (top left) from the Popular Mechanics Handbook for Women from 1924!

Those of you who are vintage vacuum cleaner spotters or fetishists will recognise the device in the illustration (top right) and for those of you that do not I can confidently advise that it is a stylised depiction of Ediswan's Little Glutton.

Whilst on the subject of vacuum cleaners, before I get into the history of the development of these fascinating home servants, I wanted to warn about the dangers of misusing these devices. As many of you know, men are fascinated by mechanical devices and really, despite the exhortations from their wives, mother-in-laws, husbands or partners they really need to STAY AWAY from vacuum cleaners because there is great potential of serious injury to men when using them. I first became aware of this peril as a research scientist perusing journals when I chanced upon the Journal of the American Medical Association (`Laceration of Penis from Hand Vacuum Cleaner', 1973, 224, p.630): R Zuvall MD.

Apparently the good doctor's neighbour had been in his back yard, clad only in his chuddies, and cleaning his car interior when the hand vacuum cleaner he was using became clogged with detritus and refused to suck. Allegedly, the hapless user dismantled the cleaner but had forgotten to unplug it from the mains and.... as he cleaned the last bit of debris that restricted the impeller blades, the motor mysteriously started, and his todger was sucked into the whirring blades with resultant severe maceration - oh Bobbitt he shrieked!!!!!

And this didn't just occur in America, oh no, here in the UK, I was dismayed to find in the British Medical Journal ('Penile Injuries from Vacuum Cleaners' 5 July 1980, 281, p.26): N Citron & P Wade. This paper dealt with four cases of terrible injury describing in horrific detail how for example, at a quiet suburban house, a 60-year-old man, allegedly, just happened to be sitting in the nude changing the plug of a Hoover Dustette while his wife was out . Somehow this despicable device  'turned itself on' and caught his trouser truncheon in a wrenchingly rigid clench.

Similarly, a 49-year-old chap was helpfully vacuuming his friend's stair carpet whilst wearing only a dressing- gown. Allegedly, intending to switch the machine off, he leaned across to reach the plug and 'at that moment his dressing-gown became uncinched and his sausage was intransigently imbibed into the Goblin Triumph vacuum cleaner.

This should serve as a salutary lesson to all men - AVOID VACUUM CLEANERS and I am pleased to report that Mrs Mullard Magic respects my safety and keeps me away from our two Dyson vacuum cleaners ( DC24 & DC40 "Ball" models!!!!!!) at all times.

OK, onto the less compelling but equally informative history of the vacuum cleaner. The father of the commercial vacuum cleaner is believed to be Hubert Cecil Booth (4 July 1871 – 14 January 1955). In 1901 he attended "a demonstration of an American machine by John S. Thurman at the Empire Music Hall in London which blew dust off the chairs and he thought that "...if the system could be reversed, and a filter inserted between the suction apparatus and the outside air, whereby the dust would be retained in a receptacle, the real solution of the hygienic removal of dust would be obtained."

At first, Hubert didn't sell machines  but rather sold cleaning services. The vans of the British Vacuum Cleaner Company (BVCC) were bright red; uniformed operators would haul hose off the van and route it through the windows of a building to reach all the rooms inside. As the business grew, Hubert's gained the Royal seal of approval and his motorised vacuum cleaner was used to clean the carpets of  Westminster Abbey prior to Edward VII coronation in 1901. The business however, was nearly scuppered as after cleaning the Royal Mint, he was arrested as his machine had collected a massive amount of silver dust from the coins and he had forgotten to empty it. Thankfully he was released and went on to be granted patents for a portable machine in February 1901 after which he founded the Goblin Manufacturing Company and marketed this machine  - being the first to use the term VACUUM CLEANER. He continued to refine his device and  so began the race between Frank Garfield Hoover and Hubert Cecil Booth involving  Britain and the United States to see who could get the most popular portable machine to market.

In the end, Hoover became the household name rising phoenix like from the ashes of a dying leather and saddlery business to vacuum cleaner production in August 1908.

Although Goblin may have lost out to competition from Hoover in the household vacuum market, his company successfully turned its focus to the industrial market, building ever-larger models for factories and warehouses and Booth's company, now BVC, lives on today as a unit of pneumatic system maker Quirepace Ltd.

To read about other fascinating and hopefully not as dangerous devices, check out his blog and social media links:

Previous Post Culver Glassware Identification, Then and Now
Next Post A New Era in Vintage & Antique Shopping
0 items in your cart